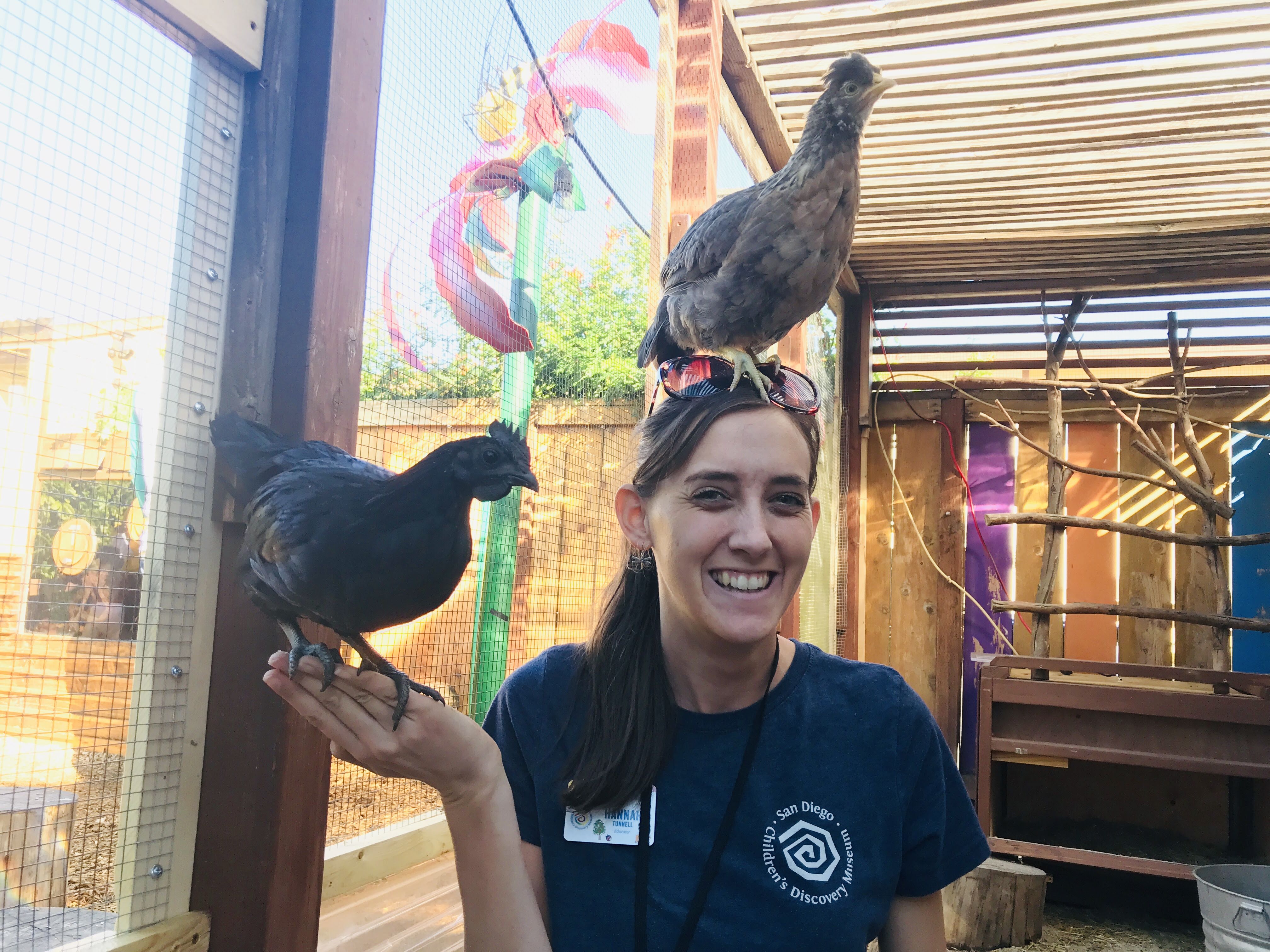 “Get that out of your mouth!”

“Be nice to your sister!”

“Does that poop look normal?”

Sound familiar? These are just a few of the phrases which my coworkers and I have found ourselves repeating over the past several weeks. Only rather than raising a rambunctious toddler or two, we have taken on the task of nurturing four crazy, little chicks!

Our chickens are now out on exhibit at the Museum but they have been learning a lot behind-the-scenes in preparation for their daily meet and greet.

We first met our chicks when they were only a few days old – tiny balls of fluff that nestled perfectly in the palms of our hands. From the beginning, the goal was to help them be as comfortable around people as possible and to keep their interactions positive and rewarding (usually of the edible sort). They lived with us in the Museum's staff offices until they were about eight weeks old, using our heads and shoulders as a perch, and getting hand-fed treats such as mealworms or kale from our Edible Garden. But in between the playtime and the eating, our girls have also had some schooling to do!

The first task that our hens learned was to “recall.” Recall training involves teaching the chickens to associate a certain noise with the behavior of running to the area where the noise is being made. This will allow us to transition our girls from one area of the Museum garden to another as easily and quickly as possible. In our case, the arrival of a chicken to the corner where one of us was shaking the mealworm container resulted in a prompt and wiggling reward. Word must have spread around the chicken pen fast because once one chicken, Buckwheat, figured it out and snagged a worm, all four were running consistently towards whichever corner of the room we asked from. Recall training was a resounding success! 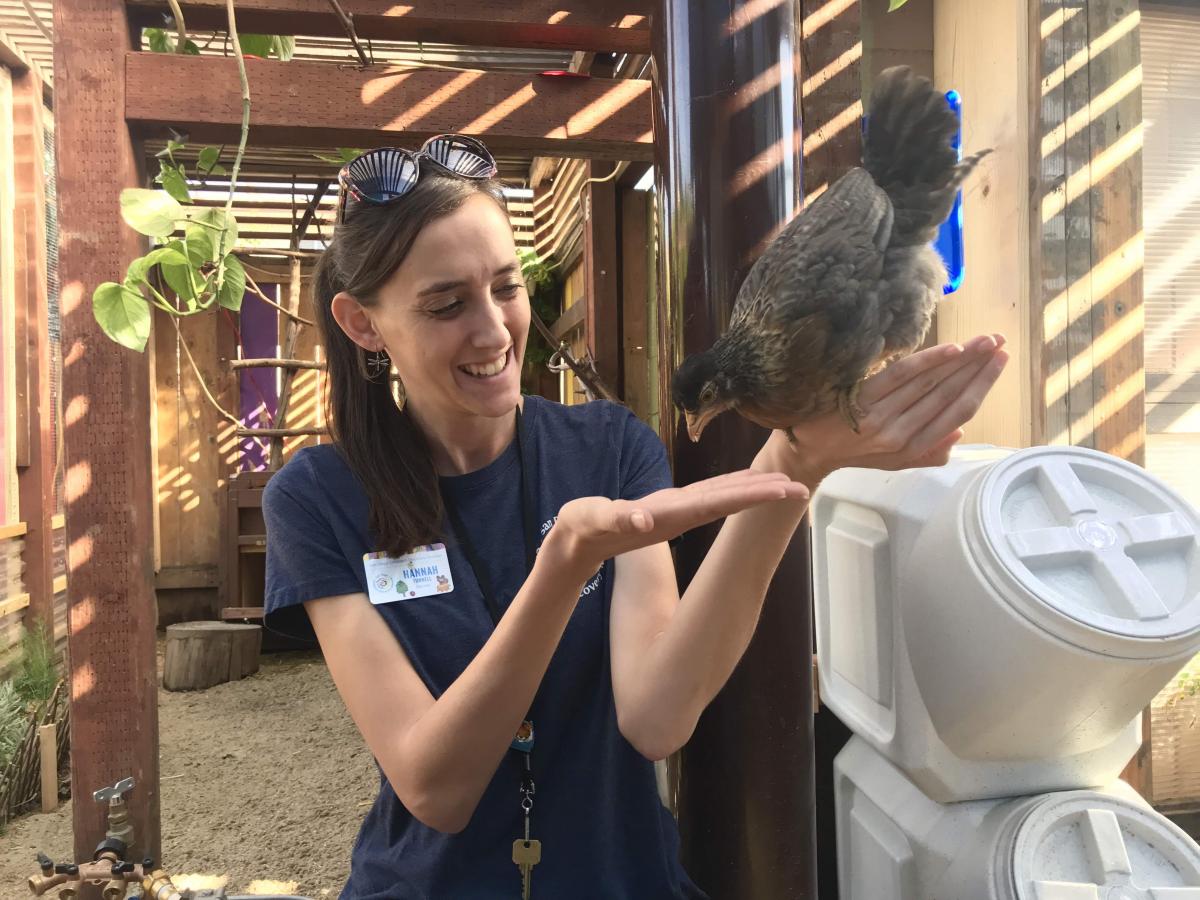 Above: Chamise getting a yummy reward for stepping voluntarily up onto my hand.

The next step was to teach them to “target.” Target training asked them to touch a certain part of their body, in this case their beak, against a paper target attached to the end of a stick in order to receive some type of positive reinforcement. This process involved consistency, encouragement, and a whole lot of patience, much like any task that you ask a toddler to complete. 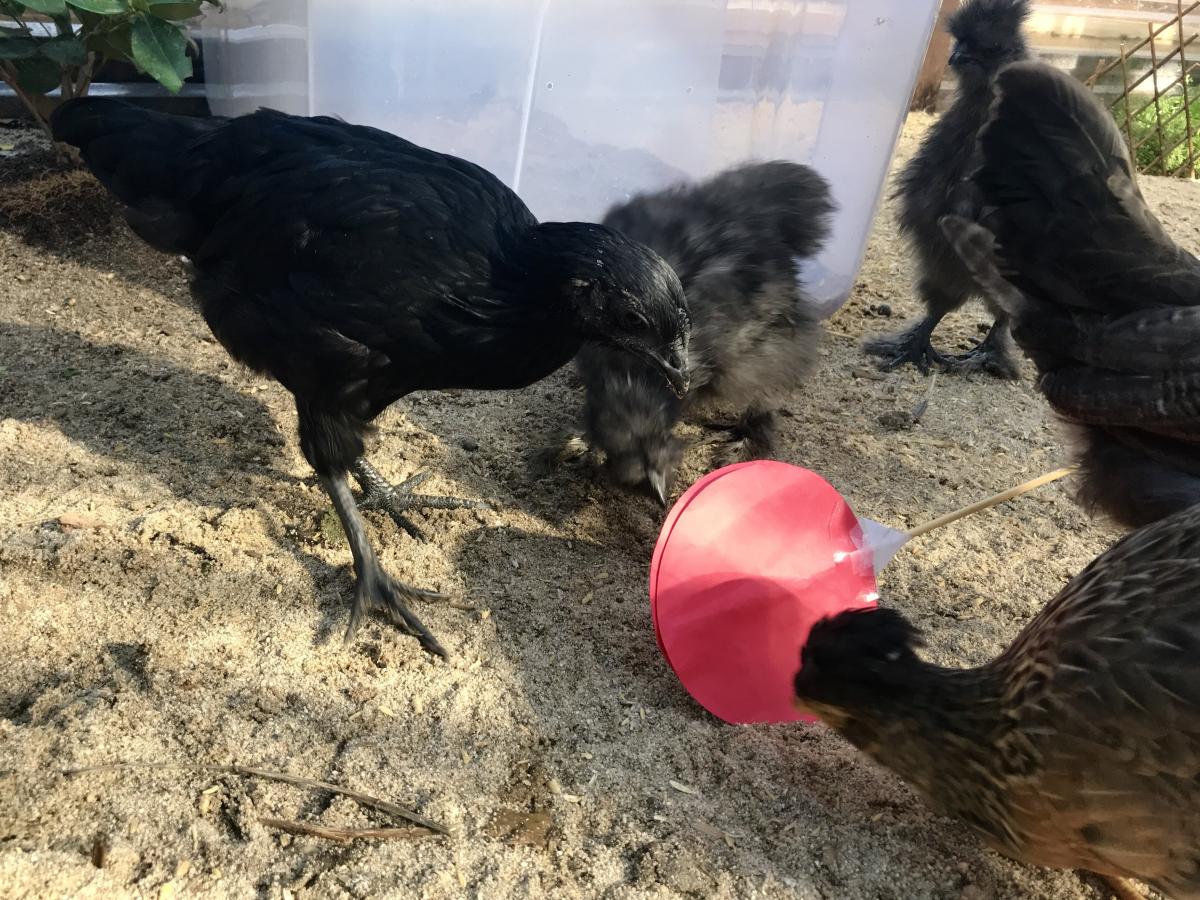 Above: Our girls vying to be the first one to peck the target.

Sage was our first chicken to figure it out. It took a lot of trial and error. She explored the surrounding area, had a close look at both sides of the target to see if the worm was hiding, and gave it an experimental scratch with her talon. But when she finally gave it a half-hearted peck and immediately received a worm in return, it only took two more repeats before she had solved the puzzle.

The other three learned at their own pace, and in line with their unique personalities. Buckwheat learned from watching Sage and mimicking her behavior. Chamise initially attacked the target feet first in her haste to snag a worm but eventually understood that her beak was the key after a process of elimination. Poppy was initially unable to focus on training whatsoever. We finally figured out that she needed her sisters to be nearby where she could see them but held firm so that they could not steal her worm before she could figure out the task. 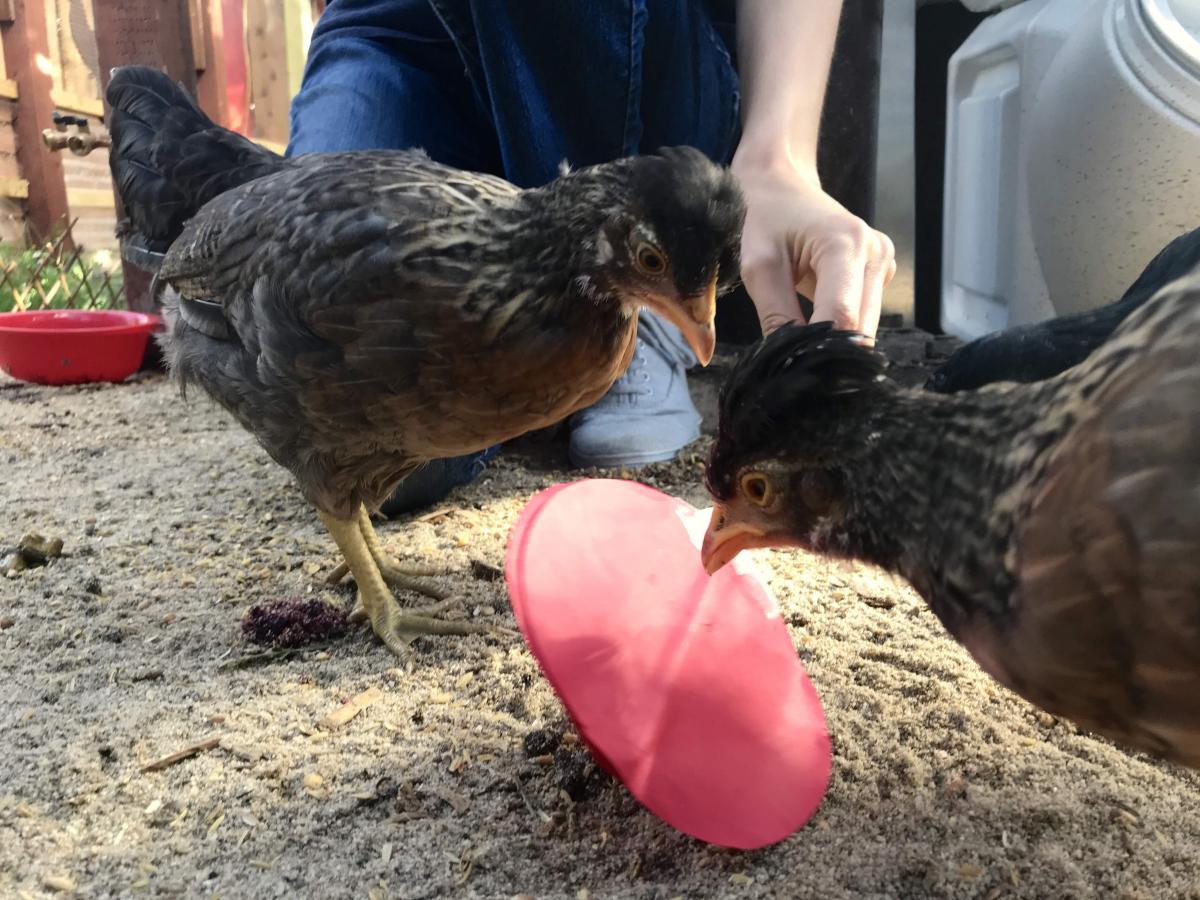 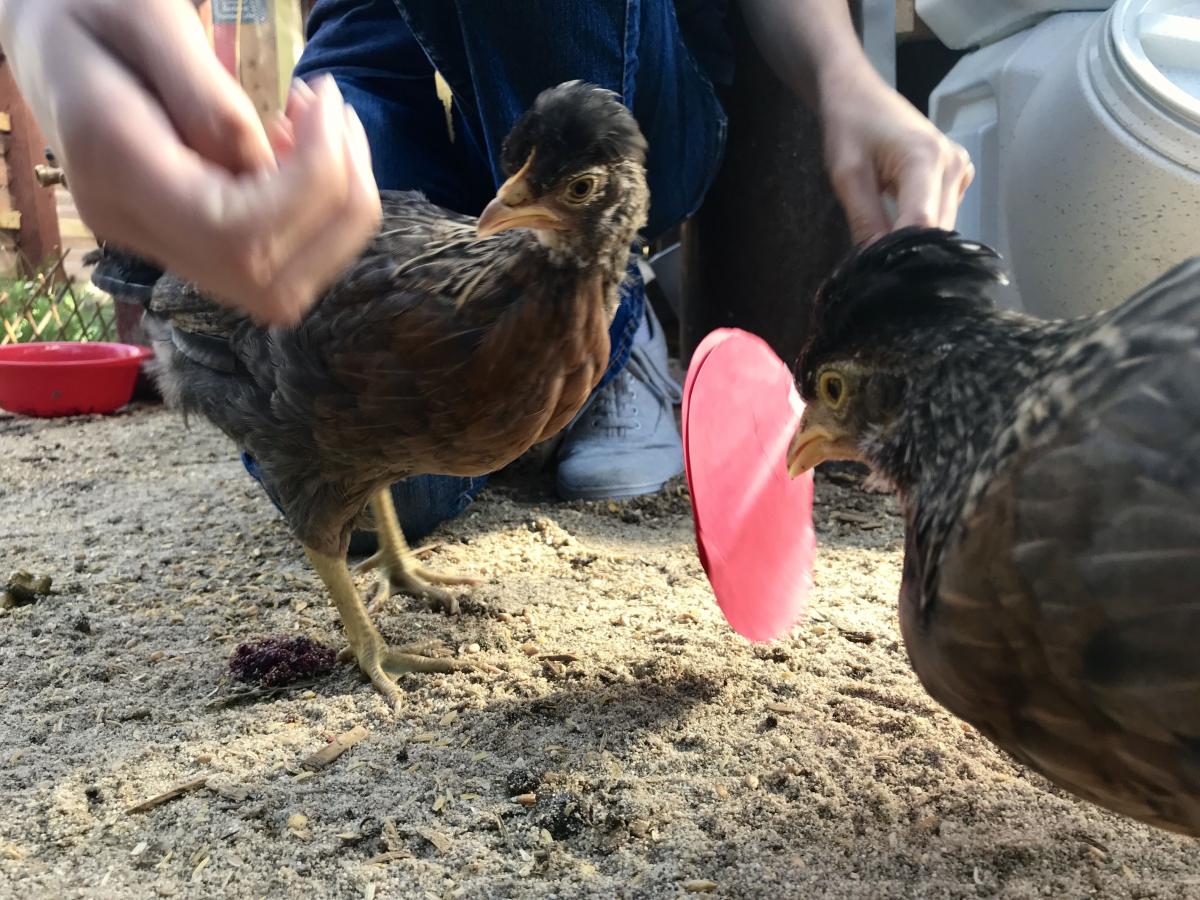 Above: Chamise and Buckwheat press their beaks against the target, and then look immediately to my hand to recieve their reward!

There are a few other behaviors which we have been able to train them to do consistently: voluntarily stepping up onto our hands, climbing in/out of their crate, and, of course, remaining calm and relaxed while being introduced to new friends at our meet-and-greet each afternoon. All of these tasks were accomplished by building up trust over time, and asking them to do things which were already in line with their natural behaviors. In the future we hope to give them a few new challenges to work on (did you know it’s possible for chickens to learn their colors?), and mainly to reinforce what they already know in order to make every day here at the Museum an enriching one for both our chickens and our guests!

> Visit the Museum for daily chicken meet and greet!

Hannah is an educator at San Diego Children's Discovery Museum, and no stranger to chickens and other animals. She has a background in both zoo education and animal behavior research, and a B.S. in Environmental Studies from UCSD. Giraffes are actually her favorite animal, but since they don't fit very well inside the Museum doors, chickens are the next best option! Helping to raise/train these chickens has been a really fun challenge so far, and she can't wait for our visitors to fall in love with these girls just as much as she has.